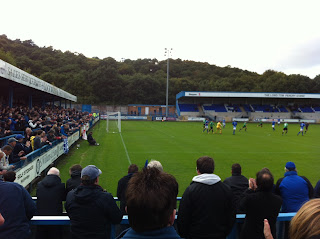 We fancied some real football on Saturday so took in a trip up to Bower Fold, home of Stalybridge Celtic to see the visit of Chester, a club which has fallen through the leagues only to bounce back again.

As I've been to Hyde a few times this season it seemed traitorous to go on the home end of their bitter enemies, so we joined the 800 or so Chester fans behind the goal. The first half was horribly, cruelly, one sided with Chester setting up a 4-0 half time lead. The second half was a 2-2 draw, which is all the Celtic bench of Jim Harvey and Tim Ryan could have hoped.

I liked Bower Fold, a nice little stadium, two stands and two covered terraces. It's my 133rd ground on which I've watched senior football. These trips are fun, a glimpse into a slightly more joyful and honest version of football. It's also heartening to see so many fans rally to the flag of their club after everything they've been through.
Posted by Michael Taylor at 12:57 pm

Yes I love this ground, very picturesque if you sit in the main stand with a view of the rolling forestry hills.