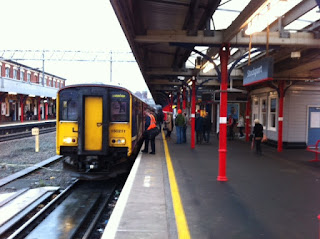 In that strange period between Christmas and New Year one is often tempted to do strange and new things. Today I joined less than a dozen other men and one woman in travelling on our local ghost train, the 09:22 from Stockport to Stalybridge. This is a weekly service, yes weekly, and is the only train that stops at the otherwise defunct and deserted stations at Reddish South and Denton.

I was ready to categorise my fellow travellers as trainspotters or rail enthusiasts, (you know the cliche's - not a wedding ring amongst them) - but detected just a few curious blokes looking to check out something they'd heard about on Radio 4 recently, or had read this lively piece by Michael Williams in The Independent.

The train edges out of Stockport heading north, turning right (very slowly) at Heaton Norris junction and snaking through towards Reddish and then Denton on a single track. I'll be thinking of this underused line the next time I sit in traffic on the A57 as people from Denton drive to Manchester as a commuter service to the city hasn't proved to be within the wit of any rail planners. Both stations are just grey platforms served by this train. Presumably the cost of decommissioning them is greater financially and politically than keeping them notionally open. Andrew Gwynne MP mentions it here.

Top blogger Stuart Vallantine alerted me to the service when he blogged here about the service when it used to run on Saturday, which may have made some kind of sense. Now it just runs on a Friday and arrives in Stalybridge before the legendary buffet bar has even opened, but in time to get back on a crowded train to Manchester Victoria within minutes. There being nothing to keep me in Stalybridge at this time of day I opted for this and then hiked back across Manchester to Piccadilly. 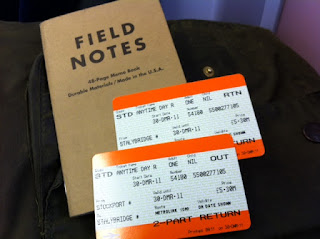 This is one of the so-called Parliamentary trains - a route that is kept open for unclear motives, either political or for more Kafkaesque bureaucratic reasons. Maybe there lies the possibility of doing more with the line and these stations in the future, but for now the train operating company keeps this rather pointless service going.

My kids just laughed when they found out what I'd done and kept singing this mildly irritating song called "I like trains" at me. Apparently it's some kind of YouTube sensation.
Posted by Michael Taylor at 7:37 pm