Meeting Hooky at the BBC at Salford Quays 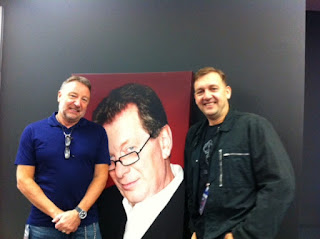 We had a great experience this morning as I was a guest on Gordon Burns' programme on the BBC Radio Manchester AND Lancashire. The first such show from Quay House at MediaCity. You will be able to listen to it for a while if you click the iPlayer link here.

I was reviewing the Sunday papers with Maria McGeoghan, the editor of the Manchester Evening News, who is always very lovely company. We picked up a few serious highlights to start with: Steve Jobs, the rising popularity of crafts and a good piece on climate change that Maria found. In the second part we highlighted TV shopping, the X Factor, Christina Aguilera's backstage demands, internships and I had a bit of a rant about the hopeless cause that his Blackburn Rovers under Venky's.

It was great to be broadcasting from a studio with a view and one where Rachel and the kids could watch from the office outside. It was also a fantastic experience watching Gordon Burns work, he has a great manner about him. He carries such authority but he also interviews and discusses in a very easy way. No wonder Sir Alex Ferguson wanted his first BBC interview to be with Gordon. But as much as he makes it look easy, he prepares very methodically.

The guest after us was the great Peter Hook from New Order. We had a good chat about his forthcoming concerts and the experience of RAW 2010 when he was interviewed by John Bishop. I was ready to apologise if he hadn't, as it was my idea. His daughter took this picture of us next to his old boss and our much missed friend Tony Wilson. I wish I'd told him how much his music has meant to me over the last 25 years.

There's a growing realisation that the BBC move to Salford isn't just a good idea, but a popular reality. It has started to put the inaccessible BBC just that bit closer to the heartbeat of the nation. Yes, this is good for the BBC, but it's also important for the North too. This piece in the Spectator by William Cook is refreshingly positive without being patronising. Hopefully the rest of the country will awaken to what greatness lies within the North, and appreciate that not only will great things happen, but that they have been happening for years and this is just another step.
Posted by Michael Taylor at 1:37 pm