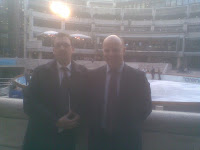 Went to London yesterday. Always a pleasure to visit our capital. Here are ten things that made me smile.

Business wise it was a great success, but I don't get into that kind of detail on here.

Better still was the chance to catch up with my bessie mate from way back, John Dixon. Here we are, above, at Broadgate Circus.

I saw that Banana Republic has opened in London. It always used to be a feature of American work trips that I'd get a few bits of gear from BR. Didn't seem that special to be honest.

Beak Street used to be home of the Lonsdale shop. Now that it's been chavified by Mike Ashley that store is no more. Near by however was this nifty little gentlemen's outfitters called Albam here. Got a new coat.

They were playing the Echo and the Bunnymen first album, on vinyl, and selling unlabelled simple threads. And they seemed to have lots of copies of Monocle knocking about.

Next door I saw this superb collection of cards at Gathered Images.

And these at Simon Spicer.

Beak Street still has the CP Company shop selling items of rare beauty. Such a shame that Clone Island has become a nasty badge of terrace scum. The good stuff is ace.

I was jumped on my a gypsy woman trying to sell me lucky heather. If it's so lucky, love, then how come you have to mug people in London to make a living?

I'd forgotten how popular after work drinking is in London. We were in the City later and everywhere was buzzing with groups of people talking about pork belly futures, etc.
Posted by Michael Taylor at 4:43 pm