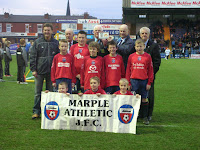 We've all been to Stockport County today. Marple Athletic Junior Football Club have been officially awarded with the FA Charter Standard so 180 of us took over the far corner of the family stand and watched a rough tough Hereford United beat County 3-2.

I'm "media officer" for Marple Ath, so this blog is one of a number of outlets we've managed to get this story onto. My pal Ruth Shearn has sponsored Joe's Under 9s team through her company RMS (Ruth's Marple Stars) and she's been plugging us with her usual boundless enthusiasm. Jon Keighren mentioned us on Pure FM. Ath's founder Alan Rainford has been on BBC Radio Manchester and we're hoping for a bit of coverage in the Stockport Express.

I've also finally managed to get the club's website, www.marpleathletic.com, up and running. It's still got a few rough edges, but we'll get there.

It's been a great day. The Under 9s teams won 10-0 and 2-0 against spirited Stockport Vikings sides this morning. And I believe the Under 10s did well too.

To complete my Marple sporting tour de force I went to the Marple Cricket Club dinner last night with a great bunch of blokes, Trevor, Mark, Andy, Kevin and Dom, who I've got to know since we moved here. Speaker was Mark Ilott, who was a better after-dinner than he was a fast bowler.
Posted by Michael Taylor at 6:47 pm