A weekend of sporting glory

Well, it was for us anyway. On Saturday, Marple Athletic Under 9s (A) won 2-0 in a tough game on Saturday at home to Signol.

After wolfing down the braising steak I managed to ruin we hot footed to Ewood Park for the 4-2 win over Reading. Rovers were awesome in the first half and there was evidence that Tugay may be some kind of superhero with his goal. By golly hasn't Benni McCarthy done well since Mark Hughes took the brave decision to drop him when his performances were: "not of the standard we require". I can't add much more to the report than what is in the paper today, here.

It was nice to bump into the BRFC London Supporters Club again. We joined them in the Premier Lounge after the game where David Bentley was presented with his player of the season award for last year. Picture of Elliot after a nifty nutmeg on Bentley: 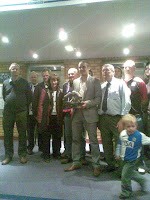 OK, the rugby was a let down, but hey.

The Marple Athletic Under 7s continued to do well at Curzon Ashton. A win and a draw.

Formula One? Who cares?
Posted by Michael Taylor at 11:40 am

Living in Marple? why not support Stockport county?

I support Blackburn Rovers because I'm from Lancashire. I've been paying council tax to Stockport MBC since 2000 and have only been to Edgeley Park to watch Sale Sharks. Marple Ath will be hooking up with County for a presentation, but they ain't my team.

Anyway, the nearest clubs I could pay money to watch are a) Woodley Sports, b) Hyde United, c) County.