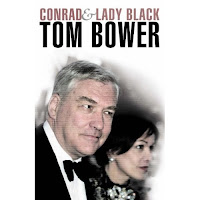 Tom Bower, the master assassin of the rich and famous turns his pen on the former owner of the Daily Telegraph and his wife. Conrad Black, who comes across as self-important and pompous, is on trial for ripping off his shareholders in order to fund a lavish lifestyle. He craved power and influence and a seat in the House of Lords. His five-times married wife, Barbara Amiel craved status and wealth beyond their means. She doesn't sound like a very nice person at all. He just comes across as deluded. Either way Bower doesn't cut either of them much slack. They're suing him now.
Posted by Michael Taylor at 12:15 pm